A Memorable Giving of Thanks

I’m not a big worshiper of a particular holiday, but I do enjoy reasons to gather with loved ones to give thanks and show appreciation for our amazing lives (and the mashed potatoes are pretty good too). So at a recent pre-holiday potluck we reflected on memorable Thanksgivings, and I was reminded of a doozy. Think Pilgrims “meaning well” when coming together with kind local Indians, and that will set the stage nicely…

In the fall of 2011, our four-person expedition team and three-person film team were making our way across Bhutan trekking and mountain biking while shooting a documentary film. While the expedition itself was life-shifting, the film making and overseeing of the project in total, while on-the-fly, was all consuming. So we decided early on that about six weeks in we would take a rare one-day break in moving forward to make a traditional Thanksgiving dinner for our Bhutanese staff. What we didn’t know then was how comical and deeply moving this task would become.

Total head count for dinner would be about 30 people. In our whimsical enthusiasm we conveniently ignored the glitches in our idea; that they not only didn’t have turkeys (and most other ingredients) in Bhutan, but they didn’t have ovens, and that our Bhutanese staff had no idea what Thanksgiving even was.

But with no worries, we eagerly gathered ingredients that we thought we might need, early on in the expedition, throwing the sometimes peculiar random packages we acquired in boxes in the back of our gear truck. In a country where most food stores are smaller than your living room and more-or-less carry all the same stuff, we naively decided we’d be able to get most of what we needed at our holiday destination, a small town in the far east of the country. And oddly, we never fully addressed with each other the issue of no ovens in the country. With the mentality of adventure racers, I think we had a flippant confidence that we’d surely find a way to make it all happen when we got there. Who needs an oven on Thanksgiving!??

After several days of harsh mountain biking, the special day arrived, but we didn’t have time to actually start shopping for the main dinner ingredients, like potatoes or a bird of some sort, until about 3 PM. While we divided up our shopping list, then each cruised through tiny store after tiny store on the only main road in town, we remembered that the quickest way to solve a problem in Bhutan was to verbally put the word out. The entire country is like a small town and everybody knows what everybody else is up to. If you need something you just start chatting people up. So since we knew that turkeys weren’t an option, we started putting the message out that we were looking for chickens, or something similar. About 45 minutes of marginally productive shopping later we were approached with, “for chickens, come this way.”

We were led down a narrow wooden staircase into a dark basement lit only by the sun coming in through small slots in the upper part of one wall. There was a large unidentifiable carcass on the table along with a clearly identifiable pig head. After what felt like a calm, covert drug deal, we left with several skinny chickens and still no means with which to bake them. But we had an idea and we’d test it out when we got back to the lodge—at 5 PM.

Our lodge host not only let us kidnap his entire kitchen for the remainder of the evening, he let us jury-rig into an oven the large wood stove used to heat the dining room. This burly metal tube cranked the heat when at full burn capacity, surely it could cook a few scrawny chickens? We’d wrap the birds in foil and bake them in a small empty slot within the wood stove, and while we were eating dinner we’d bake my teammate Tony’s impressively engineered apple pies for dessert. Since we were launching our entire food prep process at about 6 PM, we at least had foresight to get lots of local cheese, crackers and whiskey to occupy our Bhutanese staff, who would be showing up expecting dinner within the hour.

Despite several cooks, too much cheap wine, copious laughter, ad-libbing most of the dishes and almost burning down the dining room when a chicken grease fire smoked out the entire lodge, we were quite pleased with ourselves when we laid out our motley dinner, just before 10 PM. But the patient Bhutanese were still slightly perplexed as to why we were up to this crazy endeavor.

After everyone was served I shared with our entire crew a brief history of American Thanksgiving in our young country, as well as that in present day this event was about sharing with loved ones; not only a traditional meal, but reflecting on what we were deeply thankful for. I reiterated how pleased we were to be there to share this special day and to honor and thank them, our new Bhutanese friends, for their support in our journey.

After a weighty pause, one of the leaders of their group spoke emotionally, offering that they were deeply moved that we would invite them to such an auspicious occurrence. Not only was it highly unusual for Bhutanese staff to sit together and share meals with foreigners (we had been trying for weeks to cajole them into joining us at dinner time) but it was unheard of for guests in their country to cook for them. Our lodge host was quite distressed during our entire cooking process that his staff wasn’t making dinner for us, and they kept trying to step in and take over. Bhutanese live by and honor tradition. For us to turn the tables and serve them on such a significant national holiday meant that for that night, we were all a dear and loving family.

A dinner that was initiated as a thankful gesture, a respite from moving forward and a fun challenge, evolved into the final breaking down of all barriers between two vastly contrasting cultures. While offering hospitality that, by any American Thanksgiving standards, would be considered a dinner disaster, our efforts were coveted by our guests as a highly honorable and profound occasion. They not only were more authentically thankful than any human I’ve ever witnessed during any holiday, but they ate everything.

And I am pleased to report that not only did the mashed potatoes turn out OK, the lodge and wood stove are still intact.

What are you thankful for this Thanksgiving? Do share. I’d like to take advantage of this opportunity to offer thanks for Athleta for providing this space to share our thanks. 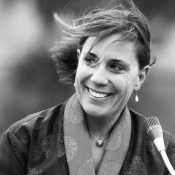 I’m on sabbatical at Royal Thimphu College for this semester and your piece is SO true especially when you said “just put out the word”. Nothing could be more true – even in Thimphu.
We had a wonderful Thanksgiving dinner here with about 40 Americans who are in Thimphu and we even had a turkey – thanks to Lori and Solomon Wang who managed to bring one with them from the states. When I told my students I would miss a concert because of Thanksgiving, they wanted to know all about the holiday so I got to share one American holiday story with them.

Susan
Thanks for sharing and I hope you love your stay there! Please give my best to Lori and Soloman if you see them. I spent a memorable 4th of July at their lovely home during one of my visits. Best to you in Bhutan!
Terri

Thank you for coming to our previous Fourth of July picnics & Thanksgiving dinners. Please know you & ANY other American are more than WELCOME in our home. We will be delighted to have you! Thank you, take care & come see us in Bhutan!. – Solomon & Lori Wang