I am Jenna and I am a recovering perfectionist. It has been 24 hrs since my last conscious “perfect” thought. How was I able to stave off my draining habit? Well, when all else fails, put yourself in a grueling physical experience to test the waters or have them test you.

As a body that’s always been drawn to creative movement and dance, any “athletically driven” endeavor that is judged by speed and endurance carries with it some doubt in my ability to perform. As such, I’ve approached my athletic training like a dancer – find the music to the movement and rehearse until you’ve got it!

I have always approached my training much like rehearsing a new dance. For my first triathlon, I assigned a rhythm to every foot strike, arm stroke and pedal push. I sang with music on the bike, blew rhythmic bubbles and breathed to the sound of my feet on the pavement. If the rhythm was off, I became frustrated until I could get back on pace. This was my way of rehearsing for the big performance. Only very early on the morning of the tri did I realize that Mother Nature had changed the venue, the music, and the whole performance itself.

If viewing the chop in the water created anxiety on land, that same anxiety was heightened once my wave was in the water. Pink swim caps bobbed at disturbing levels, reflecting how strong the current actually was. Before I had a chance to negotiate my next move, the buzzer sounded and we were off. I can only describe the experience as going through an old fashioned car wash with those big shammies pummeling the car. Unfortunately, I was the car and the shammies were the men and women around me. Hands, feet, seaweed (lakeweed?)… “Ok,” I thought, “time for one, two, three breath.” HA! Not a chance! It was “One, two, choke, gurgle, sputter…” I tried again, “One, choke, two, BANG!” Thumped in the head. DAMN! It went on like this for the next 20 minutes.

By the time I got out of the water, my thoughts had turned to, “Maybe I should just stop — that was no where near the experience I thought it would be.” I had memorized the exact amount of “one, two, three” breaths it would take me to complete the half mile and my plan was foiled. As I got to the transition area I felt more and more defeating thoughts come up. “Why am I doing this? What am I trying to prove? I can’t be the best at this!” WHOA… Really? I stopped, frozen in space. I certainly knew that voice. It was Cheryle, my inner critic, who only comes out to play at performances and big events.

I wasn’t sure what to do next. I knew I wanted to finish, but not with her at my side.

The value of this inner dialogue can prove useful if we are able to turn it around and use it as motivation. For me, the only way to turn it around is to consider my energy and feelings surrounding the issue, and whether or not those two things align. At this point, I felt defeated, but my energy was still high due to the adrenaline. I thought I had two choices: stop, or keep going. Then I realized I really had three choices: stop, keep going OR keep going. But ask yourself, “What is the energy I need be in to continue and enjoy myself.” My answer to myself was, “I need permission to play.” By taking the intensity out of it and the perfection of the circumstances away from it, I could move on with the race.

During the bike, the wind was a challenge and I was passed by a rider in mucho gear on a continual, annoying basis. I started to sing Michael Jackson’s “Mamasay Mamasa Mamacusa” over and over again until I was smiling. After the turnaround, the wind was at our backs and I had my speed again. When I later passed the same rider I said, “Now I’m on your left! Tag you’re it!” I played this way throughout the bike and run and finished with my goal of under two hours.

Now was it perfect? Hell no! I’m not a triathlete by trade, I don’t own a speed helmet, and I only ate half of a GU through the whole race. But was it fun? YES YES YES! By letting the event be fun, I reminded myself that I am deserving of that fun in even the most doubtful of endeavors. Play opened up opportunities for me that didn’t exist in perfection. Play let me be Jenna, and not “Jenna the Dancer,”or “Jenna the Pilates Teacher.” Play let me giggle through the pain and smile at the finish and far outweighed perfection in every way.

I’d like to consider myself “reformed” at this point, but I know far too well that Cheryle will show up again soon. The difference is that this time I’ll be ready to check in with my energy in this moment as I’ve learned that the perfect rehearsal leaves no time for play! 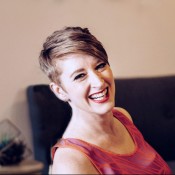 has danced, ran, written and “Pilates-ed” her way through a life of “moving experiences.” As one of the top teachers in the industry, Jenna’s passion shines through Pilates lessons that highlight the mind/body connection as a positive influence towards a balanced lifestyle. You can follow Jenna on Facebook, Twitter, and her website.

CONGRATS Jenna from one perfectionist to another VERY WELL DONE!

I need to have a talk with Cheryle! Great piece and you always give us food for thought!