I’m traveling a ton these days and it never fails…I can spot the runner in the crowd. Whether on an airplane, in a hotel lobby, or dining at the table next to mine, there is this thing that a runner has, does or is, that lets other people know…”I am a runner.”

I don’t know how many times, over the course of my life, I’ve heard, “you’re a runner aren’t you?”  I’ve been guilty of uttering those words to someone else, a few times myself.  But once those words are exchanged between two strangers, we are strangers no more.  The stories begin…the words of that shared running experience…the pain, the joy, the determination; the fear and persistence…all come tumbling out.  The “knowing” that comes from having crossed the finish line after 26.2 miles provides the immediate bond I always feel with my runner friends, whether I know them well or not.

This premise is what lies at the foundation of Girls on the Run.  We don’t run to improve our cardiovascular functioning (although it does.)  We run because of that magical thing that runners have, do and are…this kind of authentic way of being, sharing and living that bonds each of us to the other. Running has this mysterious way of exposing something from deep inside…something raw, real and vulnerable.  Like unpolished ruby or emerald, the beauty revealed rests not in the glimmer of the gem, but in the cracks, dirt and crevices that weave their way through the daunting red or green.

Taylor is in fifth grade.  Average build and average height, Taylor looks like many fifth grade girls. Short blonde hair that bobs up and down when she runs…her stride is colt-like, unsteady a bit but beautiful and innocent in its being that way.  She loves Miley Cyrus and has a dog named Sunshine.  Her sister and brother are a lot older and her parents are older than most of the other girls’ parents too, but that’s okay with her.  She likes being the baby in her family.  “My mom says I’m special.”

In the summer after second grade Taylor was diagnosed with Batten Disease, a degenerative neurological disorder that begins first by attacking the optic nerve.   In second grade, Taylor could see and now in fifth grade she can no longer.  But that wasn’t stopping her.  When the Girls on the Run brochure came home in her back pack, she begged her mom to sign her up.  And so…a two foot rope with handles on either end would be Taylor’s lifeline to our program.  Each step she would take around that school track would have her hand on one end and her sixteen year old running buddy’s hand on the other.

Over the course of the 12-weeks the girls are training for a 5k while playing games and activities to enhance their confidence.  About 2/3 of the way into the 12 weeks the girls get a chance to practice a 5k so they are fully prepared for their season-end “official” 5k.

Today was that day. The weather was crisp, stringy white clouds suspended like small spider webs beneath a round yellow sun.  Balloons lined the track as did a handful of parents and supporters.

Forty-five minutes or so into practice 5k all but one of the girls had finished.  Many of them were resting beside the track, chatting with their parents, classmates, other runners.  Some were eating cookies, oranges and holding joyfully onto the certificates that signified their first 5k finish.

When Taylor came around.

“How many laps do you have left Taylor?” one girl asked.

Taylor stopped, head slightly cocked to one side, her face moving in the direction of the inquiring voice.  “Just one more.  I’ve got just one more!” She shouted out enthusiastically.

There was a momentum building…the spectators were cheering, clapping and encouraging her, when one girl asked, “Taylor can I run it with you?”

Taylor turned her face to the enthusiastic query.  “YES.  YES.  Please do.  Please do run with me.” She bubbled over.

A sudden surge in energy, another girl chimed in.  “Can I run with you Taylor?”

And another.  “How about me?  Can I run with you Taylor?”

Before Taylor had taken twenty steps into her final lap, all nine other girls in her Girls on the Run group had joined her.  Magically they encircled her, each gently placing a hand on her.–one on a shoulder, one on her back, one gently touching her arm, another her fingertips.  And,  in the center Taylor beamed.  She trusted them and lifted her head toward the sky to feel the sun’s warmth kiss her cheek. A smile as big as California, stretched from ear to ear across that beautiful fair skin…light radiating from her every step.

And if that wasn’t enough…Somewhere over the course of that last lap, something miraculous happened.  Taylor let go of her rope.  She honored that moment, her circumstances and her state of being by surrendering to them.  She let go and took hold of something far greater.  She held onto the love that reveals itself when we open our eyes to the stuff that really matters…like compassion, tenderness, friendship and acceptance.

I watched in awe.

When I run…I can see what is good, right and real in the world.  I am…grateful to be…a runner.

For more information on Taylor and Batten Disease please check out her family’s website at TaylorsTale.com » 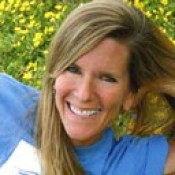 This is a beautiful story about our lovely friend Taylor and her wonderful family. Also a tribute to the kindness and genuine friendship of others. Thank you.

I have been a Girls on the Run coach for three seasons. Reading Taylor’s story brought tears to my eyes and emits again and again that special feeling only a coach knows when his/her runners find self-esteem, confidence, support and friendship through the amazingly transformational program that GOTR is. A beautiful story…

This beautiful and inspiring story had me bawling at my desk … in a good way! I rarely comment on anything, but I am just way too inspired by Taylor, her girlfriends, and her coaches to stay silent today. Thank you very much for sharing this, Molly. I can’t wait to read it to my six-year-old daughter, as a powerful example of true friendship.

Taylor is my little sister. In all my years on this earth, I’ve never come across anything as tragic or daunting as Batten disease. On many days in the six-plus years since her diagnosis, part of me has wanted to run away – to quit fighting. But through it all, Taylor – the one who stands to lose the most of all – has taught all of us an incredible lesson about courage – about honoring every moment we’re given, about friendship, about love, about believing. Taylor may be blind, but she opened our eyes to what really matters most in this world. Taylor can no longer run, but she – and those of us who love her – will treasure her Girls on the Run experience forever. I write a blog about our fight against Batten disease at http://www.writethehappyending.com. Search for the phrase ‘girls on the run’ to read posts chronicling how running has shaped Taylor’s life and our journey over the years. Thank you, Molly, for giving my sister and our family this wonderful memory.

This had me sitting with tears in my eyes. This story is the reason I am a coach.
Thank you for sharing!

This is a wonderful story and inspiration. I can just imagine she felt like she was running on a cloud. What a beautiful story. Thank you for sharing.

Is it possible to obtain updates of your blog by way of email?
That would be truly great and convenient for me!