The Art of Projecting

For those non-climbers out there, the term “projecting” is used to describe the process that one goes through to successfully redpoint a route near or at their limit.  A route is considered “sent” (aka redpointed) when the climber is able to lead the route from bottom to top (bringing the rope up with them and clipping into various protection points along the way) with no falls and no hangs on the rope.  Some projects go quickly — after only 2 or 3 attempts — others take a ridiculous number of tries over multiple days, months, or even years to be able to link all the moves together on lead.

There are many different strategies climbers use to project a route, often depending on the nature of the climb and the climber’s personal preferences.  Sometimes climbers choose to  work out all the moves and clipping stances on toprope first, before ever attempting to lead the climb.  This is especially helpful if there are significant sections of the climb without protection (known as a runout), or otherwise dangerous fall potential.  Sometimes it’s not always possible to set up a toprope on a climb, or the climber prefers to work the route on lead from the start, usually stopping and hanging on the rope many times along the way to figure out all the moves.  Over the past few weeks I’ve been working on a particular project out at Pilot Mountain, which also happens to be one of the best lines in the area — Blind Prophet (5.12b).  This past weekend I was able to finally send it, making it my hardest redpoint to date.  Here’s a snapshot into how things went down…

This line climbs as good as it looks.  The first 40 feet are a sustained and technical 5.11 dihedral, followed by a funky mantle move high above the 4th bolt with a bad swing if you fall.  Luckily there was a bomber spot for a cam, exactly where I needed it.  There’s a no-hands rest atop the mantle block, then a leftward traverse out a large roof on giant juggy rails.  Although there are a couple of long, strenuous pulls leading up to it, the definitive crux is cranking onto the upper face, with severe heartbreak potential as it’s right before the anchors.  This project is a step up for me for several reasons.  It’s a lot harder than anything I’ve worked on before.  My other 5.12 sends have all technically been head-points, meaning that I toproped them to death first, whereas this one I started out on lead from the beginning.  My first go I hung on a lot of the gear.  I got shutdown at the crux and lowered off the last bolt.  My next go I was clean until the next to the last bolt.  I fell repeatedly at the crux again, but this time I was able to figure out some key foot beta that enabled me to get established on the face and hit the handrails… but by then I was thoroughly exhausted, and my hands literally peeled right off.  I still feel like I’m a ways off from sending, as those upper moves will be a beast to link together, but I feel good about the progress I made in just one day.

My primary goal for the day was to be able to actually clip the chains this time, rather than letting exhaustion get the better of me at the very last move.  I got in three attempts today, and each time I fell at the crux, but finished the route pretty easily.  My third go was the best — fell mid-crux, then immediately got back on and finished the route without resting.  A one-hang is definitely really good progress for me.  Most importantly, I realized that the key to making the entire route go all hinges on my ability to precisely latch the upper slopey crimp at the crux.  If I hit it right, I can use it, if I hit it wrong, I immediately peel right off.  The problem is that by the time I get up to that point, I’m feeling the pump, so I’m a little more desperate and end up throwing for the hold, which means my odds of hitting it right are lower than they are after I’ve rested.  My last try I wedged my entire arm in the last horizontal before the crux in an attempt to get a weird armbar/chicken wing type rest.  I’m not sure that “rest” is the best word to use, as it wasn’t restful for the majority of my body (and I’ve got the bruises on the back of my right arm to prove it), but my plan next time is to stall out in that position long enough to shake out my fingers and forearms for one last hurrah.

I think Mr. T summed it up best… “I love it when a plan comes together.”  I was so close last time, so ever since then I’ve been envisioning my crux sequence and the moves leading up to it, trying to find any sort of subtle nuance that would give me the extra ounce of efficiency needed to keep it together at the finish.  “Stay in the arm bar longer… lock off the left arm harder… keep core tighter…”  were the thoughts swimming around in my head all week.  My first go I was ridiculously flash pumped by the time I got to the no hands rest, but I felt much better after chilling on my little pedestal for a while.

I got to the crux – and nailed the crimp!  I continued with my crux beta, which at this point is so dialed I can do it in my sleep, but evidently I was pretty adrenalized since I overshot the last deadpoint move to the juggy handrail…by a LOT.  Despite my desperate groping I peeled right off.  Falling off was quite the buzz kill, as everyone (myself included) thought it was over when I snagged the slopey crimp.  Oh well – nothing a PBJ and a few Cragbaby snuggles can’t fix!  I waited around about an hour and then hopped on again.  This was by far my smoothest run in all sections.  This time I was hardly tired at all when I got to the no hands rest, and I felt great moving into the crux.  I was even able to lock off and go straight to the slopey crimp instead of bumping up from the horrible one below it, and went almost completely static to the hand rail.  Yay for sending projects!

At 8 tries over 3 days, my time investment in this route is second only to Slabster’s Lament (5.12a), which is the route I broke my ankle on back in February, and it’s my first .12b, so I’m definitely psyched!

My climbing partners and I had an interesting discussion on the way home about projecting versus onsight climbing (sending a route first try).  We decided they are on complete opposite ends of the spectrum. Obviously, you can project at a much higher level than you can onsight, since on a project every move is wired and executed near perfectly, as opposed to an onsight attempt where you’re pretty much winging it and often might have to compensate for mistakes, missed holds, etc.  An onsight attempt is exciting, edge of your seat, not knowing what comes next type of climbing. Projecting is much more methodical, and culminates in a zen-like moment where everything goes right and a route that you previously struggled to even get to the top of  just flows. There’s only one chance to do something right the first time, so onsighting can be pretty intense, both mentally and physically.  With a project route the mental pressure is more long-term —  though there are no expectations in the early stages of working a project, there comes a point where you realize a send is within reach and its just a matter of time, which can bring the “must send now” pressure to a steady boil.

So is it better to be a good onsight-er or a good redpoint-er?  Which style requires more mental muscle and physical toughness?  In my opinion, the answer is all of the above.  A smart climber is able to find that balance between the two.  If you only climb routes you can onsight, you’ll never know how hard you could really climb if you’d invest more time on a route and push yourself a little.  However, only working routes that are at the outskirts of your limit not only keeps you from being well-rounded and consolidated at a particular grade, but is also a great way to get injured.  For me personally,  I prefer to stick mostly to routes within my onsight range when we go on multi-day trips – if I don’t onsight it, I may pull the rope once and try again, but I won’t spend all afternoon on one route.  Most of my projects are on local rock that I can get to any time I want.  Logistically, the onsight pool at the home crags is pretty picked over at this point since we’ve been in the area for a while.  Also, since I’m just down to a handful of routes that I haven’t done in these areas, I don’t feel like I’m missing out on a whole slew of area classics by narrowing my focus to just one route on the day.

Just like with most sports, climbing styles and strategies can be a metaphor for life – sometimes good things come easily or right away with a lot of pointed effort, other times we have to be in it for the long haul.  But in both climbing as well as “real life,” the journey is just as important as the destination. 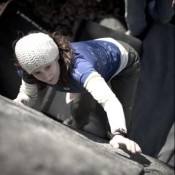 So impressive that you can do that! I would love to see the views that you get to. My mom loves to tell the story of me when I was a tiny girl leaning out over the rocks to say hi to the climbers below me. Scared the wits out of her. I didn’t understand what all the fuss was about. :0) Good for you that you met your goal!

Thanks Gen! The end view is certainly one of the most rewarding parts!