Mariano Cruz sat across from me, all five-foot four of him, Roman nose, dark skin, sallow eyes. He ate a chunk of smoked duck breast, licked his fingers, took a gulp of red wine and gave us a gentle smile.

My husband, Mark, and I were on the front-end of a fly-fishing trip along the spine of the Pyrenees straddling Spain and France. We had spent the better part of the morning hiking through the dense riparian habitat of the Pyrenees and dropping lightly-dressed dry flies on the fast-moving green water of the Adour, catching small brown trout (like the one pictured below) and releasing them back into the cold European waters.

The land, the water, the flowers were fairy-tale like. Everything lush, dark, and secluded. Fly-fishing in Europe is not like in the US — on most streams you have to be part of a club to fish the waters; they’re private. Mariano may as well have blindfolded us on the way to these secret little slices of heaven. “Ev I tell you zee name of zees stream, I’ll hav to keel you,” he told us in his best English. I checked for the twinkle in his eye.

Despite his secretive demeanor about our locale, Mariano was friendly. He taught us his technique for the types of waters we fished and gave directions in a mix of languages while talking out the side of his mouth as he kept his hand-rolled cigarette balanced on the other side. I never could figure out how he could inhale such strong smoke, hike the way he hiked without dying, or how he could roll a cigarette in the middle of rushing stream while still fishing. He’s been at this for a while I suppose. He knew where every brown trout was holding, as though he were the mythical riverkeeper.

And so we sat, in the middle of the day, on the house/cafe porch of a Basque friend of Mariano, with platters of food spread before us, language barriers all around us, on the top of the world in the wildest part of Europe, the clouds rolling in, and I hesitated. Hesitated.

I couldn’t take my eyes off the blue platter. The beautiful blue conflicted with the red and lifeless beef, soaking in a pool of warm blood. The duck breast looked fatty and raw like bacon. I was pretty sure the pasty spread in front of me was France’s famed foie gras, a collection of innards of sorts. A delicacy? Yes, but for me, a grotesque one.

Mark and I exchanged knowing glances. I’m a known picky eater and Mark couldn’t wait to see how I’d handle this situation. I smiled at him and then to Mariano as I gulped a warm swallow of homemade wine and buttered a thick slab of hot fresh bread.

The Basque owner came out from the kitchen speaking to Mariano. I recognized even through the guttural tones of the Basque language that they were talking about the food. Mariano continued to smile, looked at us, smiled again; we smiled back trying to communicate how delicious we thought the food looked. The Basque owner spoke only Euskada. I spoke only English and some basic French from high school. Mariano spoke Euskada, French, and Spanish, and only a little English, but the international language of hospitality and food lay on the table before us.

This is why Mark and I travel the world, fish its waters. To try the food and wine and to immerse ourselves in the culture.

The Basque owner stood, hands on his hips and waited. It was the moment of truth.
Mariano loaded our plates with dripping meats; we raised our glasses in a toast, murmured and sipped. We began the feast. My throat constricted as I felt the moistness of the beef on my tongue, trying not to think of the blood. I gulped. I tried to smile and nod in affirmation. I kept eating, chewing slowly as the owner kept watching, obviously elated that we loved his food. With each chew time seemed to stand still, a glitch in time.

After eating the edges of my steak, the least bloody of the carcass, I knew I had to give the delicacies a try. The contrast of the torture of eating bloody beef and the pleasure of eating with Basque natives while sitting in the fog on a porch on top of the world with what started out to be complete strangers was dizzying, fortifying. I gave in to the Tower of Babel, understanding more of their Basque tones, reading their expressions, getting into a zone.

I confidently stabbed the duck breast and copied Mariano’s movements of his knife and fork as I ate the breast. I could no longer taste anything but the dark red wine I swilled after each bite. I swallowed, trying to taste the fatty duck again. To my surprise I liked what I tasted and purposely ate another bite. Then another.

Mariano could sense our enjoyment as he settled back in his wicker chair. He told us, with Mark helping to interpret his Spanish into English, how he and his pregnant girlfriend shopped for food in this village without a single store. In a mixture of chipped English and a thick Andalusian Spanish, he recounted how each year he selected his own cow, his own pig, and his own sheep, from the local farmers, his friends. Everyone does this he explained. “It is good to know where your cow came from. We have not fear of disease. We know what our animals eat; they are healthy. No part of the animal is wasted.”

As Mark and Mariano recounted the various brown trout caught that morning, discussed which flies they’d try later, my mind raced back to the foie gras still sitting untouched on the table. Could I do it? Mariano continued his stories of engorged livers to eating pig snouts as his version of fast food. I lightly spread the duck pate onto my bread making sure I was slow and deliberate so Mariano would be sure to notice that I was eating some of everything. The proprietor had gone inside but I knew he’d know too.

Mark’s eyes widened as he saw what I was doing, not so much in surprise of me trying the spreadable gray mass, but because that was the one thing he wanted to avoid. If I tried it, he would have to too. And so we sat in conspiracy, eating foods we would likely never eat again, with friends who could not speak our language. We sat at the top of the world in the wildest part of Europe no longer hesitating.

Don’t hesitate on taking a chance to try something new or to set goals you’ve only been dreaming of achieving. If you’re anything like me, you’ll feel a rush, a charge at completing something difficult, finishing something you thought you’d never do. 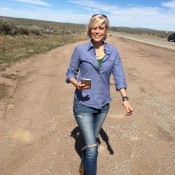 has had a love affair with the outdoors ever since she can remember. Born into a family with a legacy of women fly fishers, Amy fostered a love for the male-dominated sport from an early age. She has fly fished everywhere… more »

I remember the pig snout that Mariano offered us. We passed as I remember.

Loved this post! Thank you for the inspiration. I love reading and learning about other cultures, people, and adventures.

As I read the article, I felt as if I was part of the experience too. Very nice!

I felt like I was there with you! Thanks for the escape! Now I want to fish and have dinner with my own Mariano!

Great story Amy…felt like I was there with you! Thanks for sharing!

I felt like I was there with you, too, Amy. Great job.

Thanks for sharing your experience Amy. Your writing took me to a place that I will never be able to see. I hope you’ll share more of your adventures 🙂